What is Power Fail

Power fail is a signal which indicates that the input power has failed. This signal gives the powered system a chance to store information or switch over to backup power before the system goes down.

The power fail signal is generated when loss of power is detected within the power supply. The loss of input power can occur for various reasons, the common ones being:

An unexpected power loss can cause various system level problems in microcontroller based systems, memory systems, and other digital systems. Problems such as uncontrolled program status, memory loss, or indeterminate processor state, may occur due to any catastrophic power failure.

Since majority of applications that perform instrumentation control or machine control requires a way of recovering from a power-fail state, it is essential for the system to know the state of the operating system prior to the power loss.

The AC Fail Signal provides a warning to the system that the input power has been lost, or the voltage has dropped to a point that the power supply cannot provide or regulate power. In most cases, the signal indicates that the system has only a short period of time, usually in order of 10ms, in which to save data or start a shutdown process of the system.

The power-fail warning enable the system to use energy stored in the large input filter capacitors to power the circuit and enable the housekeeping operations such as saving data and shutting down the system in an orderly manner.

Power fail circuit is often integrated into the power supply and comprises a simple circuit that compares the voltage of the primary side of the housekeeping circuit, to a reference voltage. Once the voltage drops below a set value, the drive to the opto-coupler is removed. A power-fail signal is then sent to the system indicating the power loss.

The power fail circuit is usually isolated from the other circuit operation and is often activated to enable the supply use the stored energy to perform the normal operations for a short period of time, (about 5 milliseconds). During this time, the host system does the housekeeping functions such as saving data or shutting down just before the complete loss of DC power.

The power fail signal is generated when the input supply drops to the VPFI, after this point the output voltage PFO (Power fail output) supplies the system for a period of tPFD. 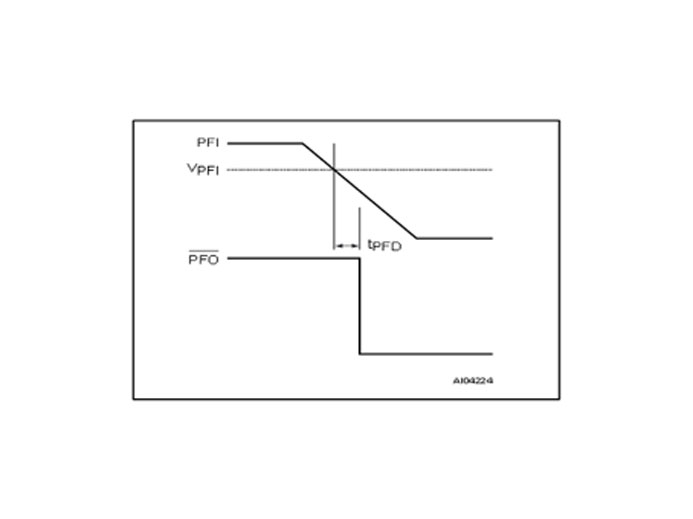 In a typical system, the power fail circuit monitors the unregulated voltage and generates a power fail warning whenever the supply drops below the power-fail threshold. A power supply continues to supply power for a few microseconds even after a power fail, this is made possible by the capacitors which usually store more voltage that the regulated output. 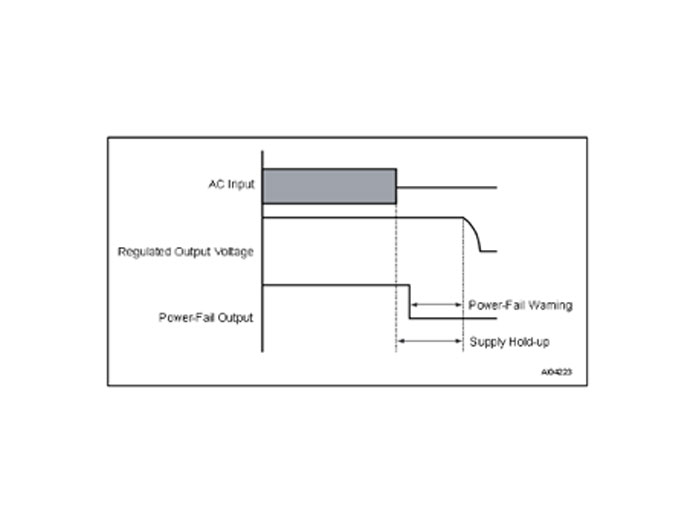 When the AC input power drops or fails, the energy stored in the capacitor continues to power the system and the power supply continues functioning during the supply hold-up time as the capacitor discharges.

An example is a typical 5V supply where the input capacitors can charge up to 8 to 10 Volts. This charge enables the capacitor to supply the stored energy for between 50 and 100 ms until it discharges to about 6.5 Volts for normal regulators, or less for low dropout regulators.

The power fail warning is widely used in power supplies for systems such as;

In battery operated systems, the power fail signal becomes active when the battery voltage drops below a predetermined critical level. The system will then have about some time to save the data and shutdown properly.