What is Switching Frequency?

The rate at which the DC voltage is switched on and off during the pulse width modulation process in a switching power supply.

The switching frequency in an inverter or converter is the rate at which the switching device is turned on and off. Typical frequencies range from a few KHz to a few megahertz (20Khz-2MHz). Increased switching frequency reduces size of associated components such as the inductors, transformers, resistors and capacitors in addition to reduced space requirements on the board and case.

This frequency influences the components selection in terms of:

A discrete components circuit or an integrated circuit may be used as an oscillator to generate either sine or square wave switching signal which is usually outside the audio range. An IC module has an advantage of simplifying the design process.

A sine wave or square wave oscillator is usually used to convert the rectified, or battery dc voltage to a higher frequency. In the SMPS supplies where higher frequencies are used , a PWM or PFM controller may be used to regulate how the MOSFET, power transistor or thyristor is turned on and off by the oscillator signal. The pulse width modulation (PWM) modifies the duty cycle of a fixed switching frequency and thus control the time the device stays on or off.

The pulse frequency modulation (PFM) adjusts a variable switching frequency thereby controlling the number of times the device switches on and off per second, the PFM has a constant on time and off time. Both modulations are usually used on square wave switching signal which is much easier to filter and regulate compared to sine wave.

The switching frequency directly affects the power dissipation in switching elements such as the diode, transistors and thyristors; the inductive and capacitive parasitic elements, and the electromagnetic interference EMI. As demand for higher power densities increase, the frequencies increase, but so do the associated losses such as the switching losses that occur every time the device turns on. These losses therefore put a limit on the practical maximum switching frequency.

The design of the SMPS must take into account the various losses and reduced efficiency attributed to the high frequencies. These losses usually come from:

Efficiencies at different switching frequencies are as shown in the figure below: 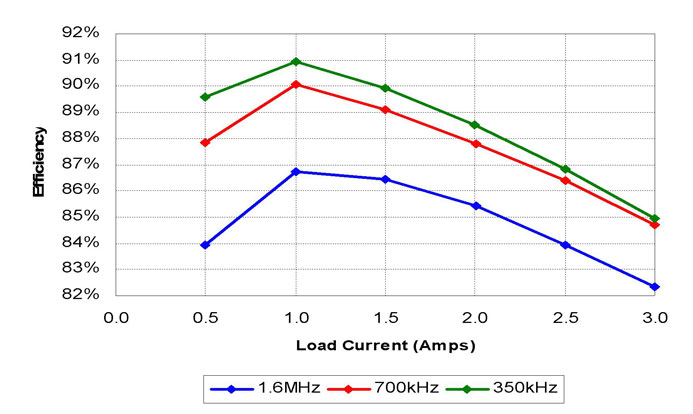 A wide range of switching frequencies is used in converter circuits based on the output voltage and sometimes the load and the available space. Advantages of using higher frequencies include reduced components size, faster transient load response time, and lower output ripple. However, higher frequencies have reduced efficiencies, increased power losses, RF noise and EMI. A designer must therefore balance between all these factors and also observe manufacturers specifications to select components with the ability to handle the design frequency.