Ideally, all grounded points of an electrical system should be at the same potential. However different points of the same grounding system may have different potentials due to:

Ground loop is mostly formed in equipment installations consisting of multiple peripherals and devices connected to different power sources, and using the data lines, video or audio wires to communicate. If there is a difference between the various ground reference voltages, a current will flow from the higher reference ground point to a lower one through a circular path that uses the data line.

The current causes ground-loop induced voltages which may lead to unstable ground reference for the system. These are also a major source of noise and interference in electronic circuits such as video, sound and computer systems. The undesired noise degrades signals and may lead to data losses. In addition ground loop can create an electric shock hazard, and especially at the exposed metallic parts that are accessible to a user. 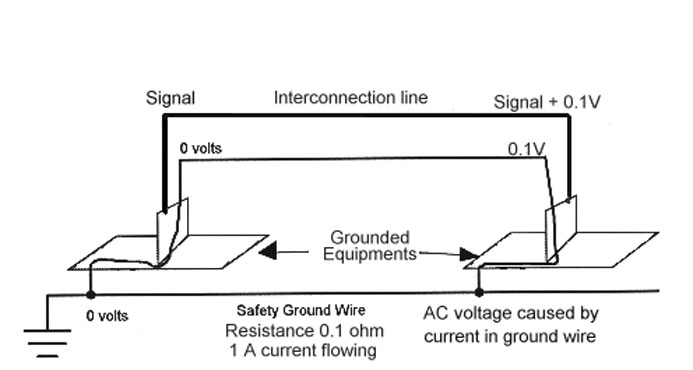 Symptoms of a ground loop

Various connection methods and circuit designs are employed to reduce or avoid the occurrence of the ground loops.