What is Capacitive Coupling?

Capacitive coupling is the transfer of alternating electrical signals or energy from one segment of a circuit to the other using a capacitor. The coupling provides a medium for the ac signals while blocking the dc energy. 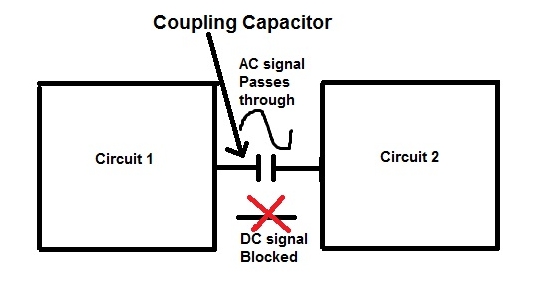 Also known as electrostatic or ac coupling, it uses a coupling capacitor connected between the two circuits in series.

The two commonly used types of coupling capacitors are the non polar polyester film and the polypropylene type. The polarized electrolytic capacitors, which are cheaper, are also used in applications where the use of the non polar may be restricted by size and cost.

When used for coupling, the capacitor offers a high resistance or impedance to the d.c voltage while providing a low resistance path for the desired ac signal. The selection of the appropriate capacitance and voltage ratings of the capacitor are usually based on the frequency and magnitude of the signal to be coupled.

The coupling capacitor connecting the two circuits and only allows the AC to pass from one circuit to the other while blocking and isolating the DC bias voltage from moving to the next circuit.

In the digital circuits, the capacitive coupling is used to transmit the DC-balanced signal, which is the zero DC component of the digital signal.

This is a simple form of the capacitive coupling achieved using two closely spaced wire strands to provide coupling in order of picofarads between the two conductors. These wires may be twisted for physical/mechanical stability.

This is an unintended coupling that may develop due to capacitance between two PCB traces or wires that are close to each other. This may capacitively couple a signal to another and give rise to unnecessary noise or interference. This can be avoided by maintaining safe spacing between the wires and other conductors, or running ground planes and ground lines between signals that are likely to interfere with each other.

Capacitive coupling is used in a wide range of circuits to pass the required ac signals or desired frequency signals and leave out the undesired dc signal. Typical applications include: