What is power supply efficiency

Efficiency is the ratio of total output power to input power, expressed in percent. This is normally specified at full load and nominal input voltage.

Power supply efficiency is the amount of the actual power delivered to the components divided by the electrical power drawn from the mains supply socket.

If a power supply with 50% efficiency is required to provide a 50W power to a load, it will draw 100 W from the wall. The other 50% gets wasted as heat and other losses. If a 90% efficient supply is used, it will draw 56W to supply the same load, meaning that it has fewer losses and uses less power from the grid to provide the same output power.

The power supplies do not have a constant efficiency; it varies with various factors such as the environmental and load conditions. The supplies achieve their maximum efficiency when operated at 50% of their load. In fact, the manufacturers guarantee the maximum efficiency only when the supply is run at 50% load.

This means buying a higher wattage supply which may be more expensive. However, it has some benefits such as reduced electricity bills; computer doesn’t get very hot, hence reduced cooling and less fan noise. Power supplies tend to have higher efficiencies when connected to 230V as compared to the 110Volts ac. 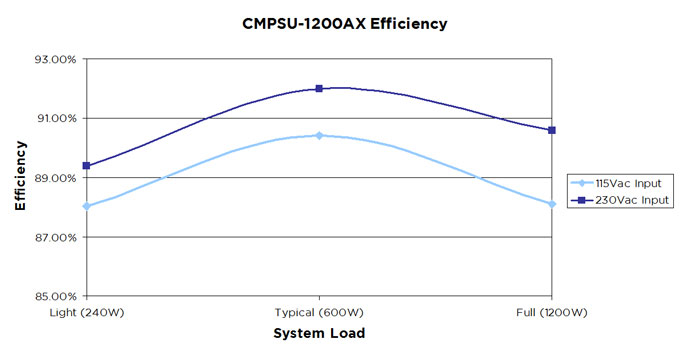 It is not possible to achieve 100 % power supply efficiency due to energy losses, but with proper design and component selection, high efficiencies of between 95 % and 97% are possible. Losses in power supplies occur due to passive and active components power losses and are more in linear supplies than SMPSs. In SMPS, losses occur in the switching devices such as MOSFETS, and other junction based semiconductors such as the diodes. Other losses occur in the capacitors and inductors especially when cheap, high resistance components are used.

Other losses include the dynamic component losses due to the MOSFET and diode switching losses that occur during the transition between the ON and OFF states since some power must be consumed as the devices change their states.

Even though expensive, high efficiency supplies help save on electricity costs, are more reliable and less noisy and require less cooling. These often use higher quality and better characteristics components to produce better outputs with fewer ripples, less noise and heat, and better voltage regulation. These components selection includes the switching devices, heavy duty capacitors and chokes in addition to better soldering work. In addition the design of the circuit may also reduce power losses and improve the efficiency.