What is True Power?

In an AC circuit, true power is the actual power consumed by the equipment to do useful work. It is distinguished from apparent power by eliminating the reactive power component that may be present.

The true power is measured in watts and signifies the power drawn by the circuit’s resistance to do useful work. In a single phase system, the true power;

In a purely resistive circuit, the angle is zero and true power is given by VI.

Majority of modern electrical and electronics equipment combines both resistive and reactive components and the apparent power must be sufficient to provide both reactive and true powers.

The relationship between the apparent power and the true power is an indication of the efficiency of the power system, the closer they are the better. The reason why there may be a big difference between the two is when the power factor is low, meaning that the consumer pays more for power whilst most of it does not do useful work. The utility company must also generate and transmit more power to meet the demand for both, the real power and the reactive power. 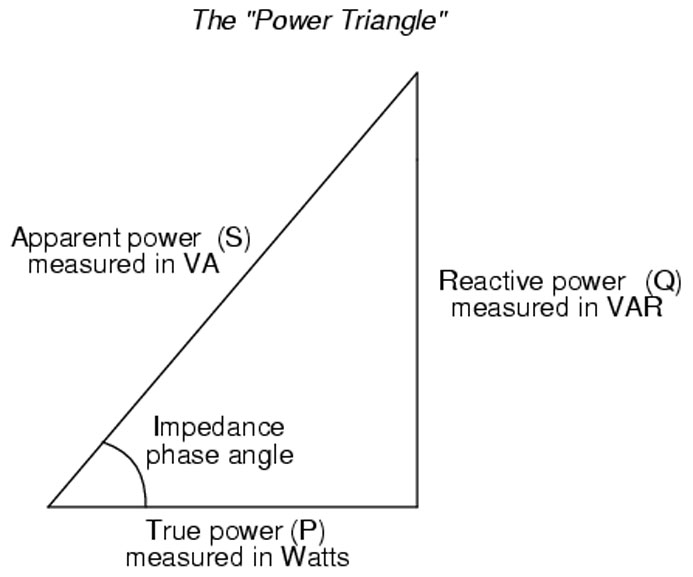 The three types of power, apparent power, the true power, and the reactive power relates to each other trigonometrically as presented in the power triangle.

The length of any of the three sides, hence the amount of any type of the electrical power, can be calculated using the trigonometry laws.

There are various ways of increasing the amount of useful power drawn by a power supply. This involves correcting the power factor and increasing it towards a 100 percent factor. Even though it is not possible to get a unit power factor in most switched mode power supplies due to the reactive components, using a suitable power factor correction can bring this to an acceptable value above 0.95.

The power factor correction reduces the phase angle and as can be seen from the power triangle, reducing the angle decreases the reactive power and consequently the apparent power. Therefore, less power is drawn from the mains and almost all of the power is the true power that performs the useful work, translating to higher efficiency and reduced costs.