What is a Flyback Converter

Principle of operating of a flyback converter

When the current flowing through an inductor is cut off, the energy stored in the magnetic field is released by a sudden reversal of the terminal voltage. If a diode is in place to conduct the stored energy somewhere useful, the diode is called a flyback diode. This only requires one winding on the inductor, so the inductor would be called a flyback transformer. This arrangement has the interesting property of transferring energy to the secondary side of the power supply only when the primary switch is off.

The basic flyback converter uses a relatively small number of components. A switching device chops the input DC voltage and the energy in the primary is transferred to the secondary through the switching transformer. A diode in the secondary rectifies the voltage while the capacitor smoothes the rectified voltage. In a practical circuit, a feedback circuit is used to monitor the output voltage and while a control circuit switching device.

Operation of a PWM flyback converter in continuous mode 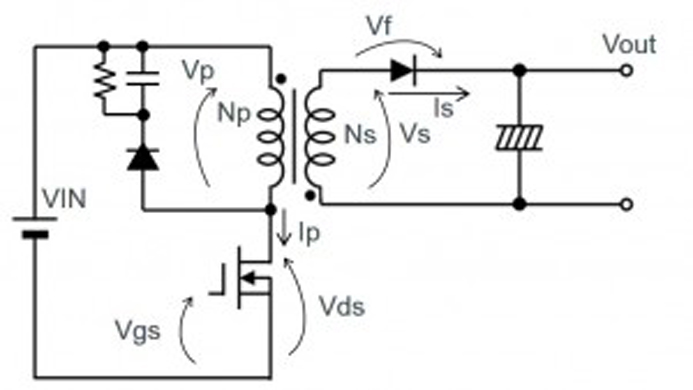 In a typical application, a switching device such as a transistor is turned on and off usually by a pulse-width-modulated signal. The transformer polarity is usually reversed such that when the transistor is on, current flows in the primary winding, however, the secondary diode is reverse biased and current does not flow in this winding. The energy is stored in the transformer until when the MOSFET is turned off. The stored energy produces a current that forward biases the diode which rectifies it to produce a DC output.

For the transformer to store energy during the period the current is flowing in the primary and later transfer the energy to the secondary winding when the switching device is off, the two inductor coils must be magnetically coupled.

Considerations when designing the flyback converter

The turn’s ratio influences the peak primary and secondary currents as well as the duty cycle. For example, when the turns ratio is low, the duty cycle is shorter and the current in the primary winding will increase.

The flyback converter are used for a wide range of electronics applications such as: