What is a Power Surge?

A power surge is an abnormally high voltage lasting for a short period of time.

A power surge is a transient wave of voltage, current or power in an electrical circuit. This is usually a sub-cycle overvoltage lasting less than a half-cycle of the regular voltage waveform, and can either be additive or subtractive with positive or negative polarity.

This is usually an oversupply of the voltage from a source such as mains supply or generator and lasting only for a few microseconds. Typical surges may last for 50 microseconds and even though it’s only a very short duration, they surge can reach 6000 Volts and 3000Amps by the time they arrive at the powered equipment.

Surges are produced by various events such as equipment faults, lightning discharges, capacitor bank building and load switching. The ability of the equipment to withstand the transients greatly impact on its reliability.

There are different types of power surges based on the sources and voltages involved. A surge can range from five to ten volts when a hair dryer is turned on or several thousand volts when a lightning strikes a transformer.

These are mostly domestic, industrial and other commercial buildings, they are usually caused by the start up and shut offs of inductive loads such as the motors. These cause diversion causes high currents to flow and divert some of the electricity to and from other electrical items on the circuit.

Air conditioners and refrigerators are the main household items that cause surges, however, smaller appliances such as the power tools and hair driers can cause problems too.

These surges stem from outside the premise or home and are caused by lightning striking utility equipment, a tree limb touching the electric power line, or a small animal getting inside the transformer and getting short circuited. Other causes may be when the power resumes after an outage, or come through the Cable TV or telephone lines.

The transient overvoltage varies in waveform, shape, and the duration. Most of these are often of short and only last between several microseconds to a few milliseconds. The waveform may be oscillatory or non-oscillatory for the impulsive transients. The surge is softening oscillatory and it decays over time and caused by switching inductive or capacitive loads.

The impulsive surges are the non oscillatory transients which are sudden high peak events that raise the current and/or voltage levels in either the positive or negative direction. These are further classified by their speed which is either fast if the rise time from steady state to the peak value of the impulse is about 5 nanoseconds.

The impulsive transients are caused by poor grounding, lightning, utility fault clearing, switching inductive loads, etc. These can lead to physical damage of equipment, data loss or corruption and more. 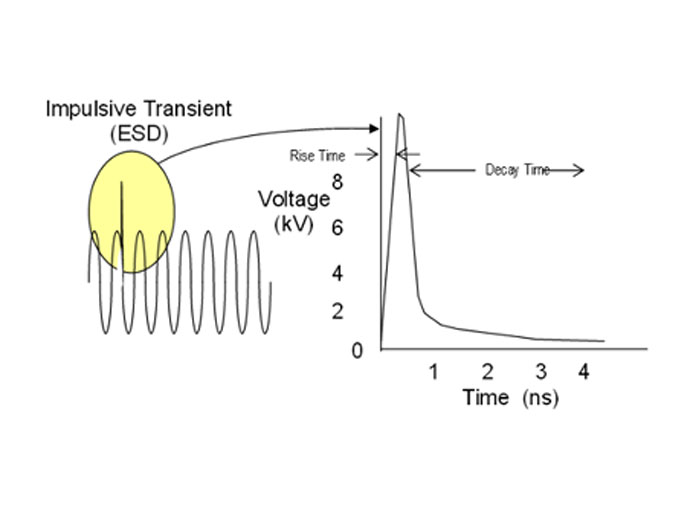 The power surges, which are brief overvoltage disturbances or spikes may reach amplitudes of as high as tens of thousands of volts, and can degrade, damage, or destroy electronics equipment within an industrial or manufacturing facility, or within a home or commercial building. Surges are common causes of failures in electronics and computer equipment.

Low level surges won’t cause instant damage such as blowing fuses or melting electronic components, instead it causes gradual degradation of the components until they completely fail. The larger power surges cause instantaneous damage, blowing up fuses, semiconductors, resistor and capacitors.

How to protect equipment from electrical power surges

The surges can be suppressed before reaching the equipment. There are different methods that can be used depending on magnitude of expected surges and the powered equipment. The most common method is the use of surge protective devices (SPDs).

The SPDs limit the transient overvoltage from reaching the equipment, hence preventing damage to the equipment. They divert the surge to an alternative route such as the ground and hence drive the excess voltage away from the powered equipment.

The common devices used are:

These components vary in their:

The SPDs have two main operational modes in which a different type of current may flow:

A point-of-use-surge protection device together with a good grounding of the electrical equipment should protect the appliances from damage by most electrical surges. The SPD does not arrest or suppress the surge; it diverts the surge to the ground.

The surge protective devices can be integrated into the power supply design, used at the power socket by connecting a surge protected plug, extension power strip, or the automatic voltage guard.

Another approach is to use a surge protector at the service line entrance. This protects the house or building from most of the external surges.