What is an Inverter?

An inverter converts the DC voltage to an AC voltage. In most cases, the input DC voltage is usually lower while the output AC is equal to the grid supply voltage of either 120 volts, or 240 Volts depending on the country.

The inverter may be built as standalone equipment for applications such as solar power, or to work as a backup power supply from batteries which are charged separately.

The other configuration is when it is a part of a bigger circuit such as a power supply unit, or a UPS. In this case, the inverter input DC is from the rectified mains AC in the PSU, while from either the rectified AC in the in the UPS when there is power, and from the batteries whenever there is a power failure.

There are different types of inverters based on the shape of the switching waveform. These have varying circuit configurations, efficiencies, advantages and disadvantages

An inverter provides an ac voltage from dc power sources and is useful in powering electronics and electrical equipment rated at the ac mains voltage. In addition they are widely used in the switched mode power supplies inverting stages. The circuits are classified according the switching technology and switch type, the waveform, the frequency and output waveform.

The basic circuits include an oscillator, control circuit, drive circuit for the power devices, switching devices, and a transformer.

The conversion of dc to alternating voltage is achieved by converting energy stored in the dc source such as the battery, or from a rectifier output, into an alternating voltage. This is done using switching devices which are continuously turned on and off, and then stepping up using the transformer. Although there are some configurations which do not use a transformer, these are not widely used.

The DC input voltage is switched on and off by the power devices such as MOSFETs or power transistors and the pulses fed to the primary side of the transformer. The varying voltage in the primary induces an alternating voltage at secondary winding. The transformer also works as an amplifier where it increases the output voltage at a ratio determined by the turn’s ratio. In most cases the output voltage is raised from the standard 12 volts supplied by the batteries to either 120 Volts or 240 volts AC.

A simple push pull DC to AC inverter with centre tap transformer circuit is a shown in the figure below. 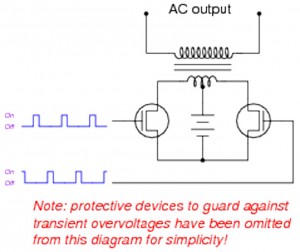 The inverters are classified according to their output waveforms with the three common types being the square wave, the pure sine wave and the modified sine wave. 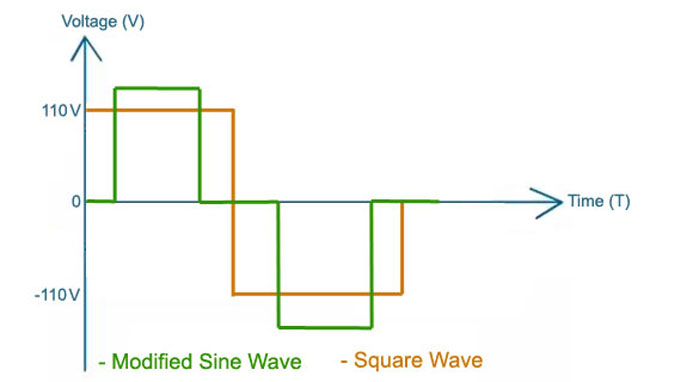 The true sine wave inverter has the best waveform with the lowest THD of about 3%. However, It is the most expensive and used in applications such as medical equipment, stereos, laser printers and other applications requiring sinusoidal waveforms. These are also used in the grid ties inverters and grid connected equipment

Inverters are used for a variety of applications that range from small car adapters to household or office applications, and large grid systems.