Sometimes abbreviated “Mag Amp,” a saturating inductor which is placed in series with a power supply output for regulation purposes.

A magnetic amplifier is an electromagnetic device that amplifies electrical signals utilizing a transformer’s core saturation principle, and the core non linear property. It consists of an iron core with two or more coils wound around it. Current control is achieved by varying the magnetic flux in the cores using the appropriate DC current through the control winding.

The static device has no moving parts, no wear mechanism and has good mechanical and vibration tolerance. In addition it requires no warm up time and can withstand momentary overloads better than the solid state devices. They are used in power supplies, in measurement systems, in nuclear power applications amongst other uses.

Construction and operation of a magnetic amplifier

A typical amplifier is made of two cores with an AC winding and a control winding. A small DC current supplied to the control winding alters the saturation levels of the core and is able to control large AC currents in the AC winding.

The amplifier uses the inductive element as a controlled switch. The coil is wound on a core having square B-H characteristics which gives the core two modes of operation. When the core is unsaturated, it causes the coil acts as high impedance that supports a large voltage with little or no current. When saturated, the coil impedance drops to almost zero and allows current to flow with very little voltage drop. The two modes thus enable the magnetic amplifier to act as an ideal switch with several benefits as compared to the switching regulators.

Factors that affect amplification in a magnetic amplifier

Circuits to control the magnetic amp may either be discrete components or specifically designed integrated circuits designed as magnetic amp controllers.

There are two commonly used configurations namely the: 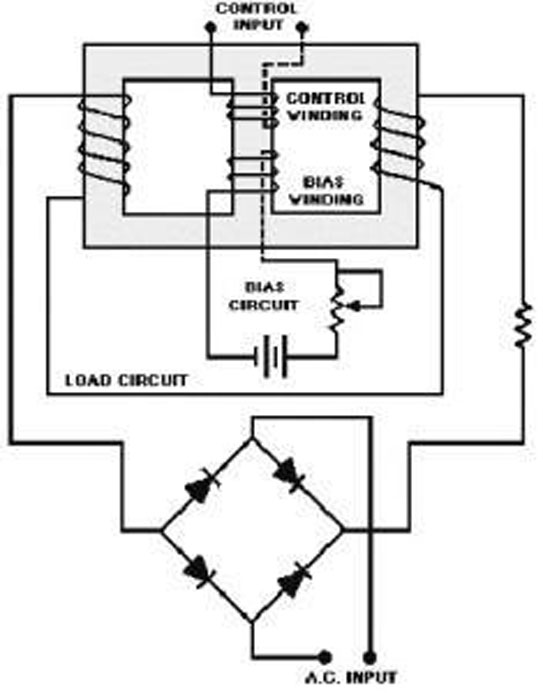