What is Radio Frequency Interference (RFI)?

The Radio Frequency Interference (RFI) is the conduction or radiation of electrical noise or radio frequency energy produced by electrical and electronic equipment. This interferes with the operation of nearby equipment or those connected on the same power system.

RFI noise is usually emitted due to arcing either by switches, SCRs, relays, motors and loose connections, or from circuits that are electrically noisy such as power supplies and UPSs. Other sources of RFI include industrial controls, electronic printers, medical instrumentation and more.

The RF interference in the power lines can be in either of the two modes:

Effects of RFI on Electrical systems

The RFI signals are undesirable because they degrade the performance of electronic circuits and equipment. In particular, they can increase error rates, result to data loss in data systems, or lead to incorrect measurements of electrical signals.

There are regulatory requirements that govern the maximum amount of interference that electronic equipment should emit. However, it is not possible to have RFI-free equipment and the best a designer can do is to control and limit the RFI, thereby preventing it from interfering with other nearby equipment, or those sharing the same power lines.

Shielding is one of the common and effective methods that minimize the effects of radiated RFI. The conducted RFI is reduced by power line filters which suppresses the conducted noise leaving the equipment. The line filters prevents incoming RFI as well.

Design methods such as using RFI filters at the input of the electronic equipment help minimize incoming interference as well as blocking the interference from going back to the electrical power systems through the power code. The RFI filter is comprised of a network of passive components in a dual-low pass filter arrangement. This attenuates the RFI signals by trapping them and preventing the signals from either entering or leaving the equipment.

The RF energy in each of the two windings of the choke should be equal and opposite so that they cancel out. The two capacitors, one at the input and the other at the output, equalize the two RF energies hence preventing an imbalance condition that would otherwise lead more interference.

There are different kinds of RFI filters; some are built into the power supply while others are external. Some manufacturers incorporate the filter inside the AC receptacle as shown below. 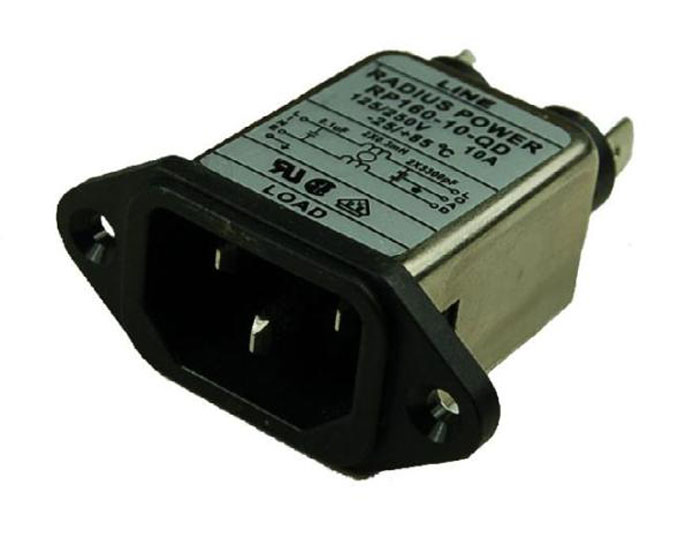 For supplies that do not use such a connector with a filter, the manufacturers often include the filter components at the primary side of the power supply unit.