What is Remote Sensing?

A technique of regulating the output voltage of a power supply at the load by means of sensing leads which go from the load back to the regulator. This compensates for voltage drops in the load leads.

The resistance of the power path leads to voltage drop along the path and causing the voltage across the load to be less than that at the output terminals of the supply.. The voltage difference between the converter output and the load input terminals is dependent on the load lead size and length, as well as the amount of load current.

Most low voltage devices requires more current for their operations and power transmission losses may occur if placed further away from the dc supply. A high voltage drop across the power leads between the converter and load will significantly interfere with the load regulation and it is important to regulate the power at the load side. Factors that affect the voltage at the load, include variations in load current and IR voltage drop along the lead wires. The two factors may cause undesirable voltage fluctuations at the load.

The voltage drop along the path is must be addressed and in particular when dealing with low voltages such as 3V and it experiences a drop of about 0.5V. To overcome these, a remote sense option is used to sense the voltage at the load terminals, compare the load voltage with the converter output voltage, and initiate a corrective action. The technique raises the output voltage such that it compensates for the voltage drop along the path and ensures that the load gets its intended value.

Some power supplies include both +Sense and -Sense terminals which can be used to remote sense the output voltage by connecting extra leads that go to the respective power input terminals of the load. The remote sensing compensates for the voltage drops across the power.

In remote sensing, the sense terminals from the supply’s feedback amplifier are connected directly to the load. This enables the regulation of the voltage at the load terminals. The supply voltage shifts accordingly so as to compensate for the drop caused by the power path resistance given by the leads, connectors, relays etc.

For remote sense to work, the power supply must be able to output more voltage to compensate for the losses and maintain the required load voltage. If for example, a 12 Volts supply in which a 1 Volt drop occurs across each lead, its output will need to go up to 14 Volts.

To avoid interference or introducing unwanted inductance that are common with long loop wires, it is necessary to use twisted two-wire shielded cable for the sense wires and lead wires when possible. Each set of the leads should be twisted, but separately from the other set. 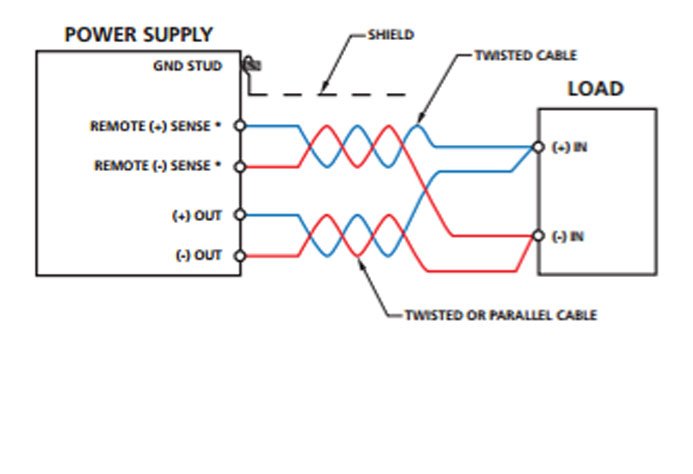 In some application where compensation is nor necessary, the remote sense feature may not be required. In this case the remote sense lines should not be left open otherwise the supply can get damaged. The supplies are often configured with a local sense mode in which a low-value resistor is connected between the V out + and the S+ terminals while the other one is connected between the Vout _ and the S- terminal.